Watershed by Sydney artist Jane Gillings was commissioned by Arts Brookfield. The installation borrowed the metaphor of the water cycle and the concept of a natural recycling system. The consumption of milk products for an average city café alone on a daily basis produces approximately 27 x 2 litre empty milk bottles. Without an efficient recycling system and willingness to participate in such a scheme, the amount of landfill we could potentially produce becomes uncontrollable. The production and disposal of plastics produces emissions that contribute to global warming and climate change. The clouds and rain also reference this phenomenon.

There are approximately 2,000 milk bottles in this artwork, which represents just under a fortnight’s worth of bottles for the World Square retail building alone. The high density polyethylene (HDPE) from which these bottles are made is recyclable. HDPE is non-biodegradable and can take centuries to decompose, so it is imperative that these containers are recycled and used again. HDPE, like many plastic polymers, is produced using considerable amounts of fossil fuels and it takes a total of 1.75kg of oil to manufacture just 1kg of HDPE. 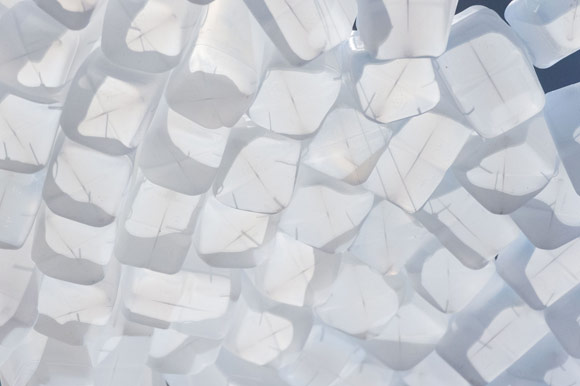